In Sharm El-Sheikh, on 8 November 2022, in the framework of COP27, an important event took place in the Mediterranean Pavilion (Blue zone), which is the result of a partnership synergy, among the Union for the Mediterranean, the European Centre for Medium-Range Weather Forecasts and Copernicus, the European Union’s Earth observation programme, together with the Greek Initiative at UN level “Addressing climate change impacts on cultural and natural heritage”. This partnership brings technical know-how and new tools to assess the climate change impacts on cultural and natural heritage, in particular as regards coastal areas and islands, which are threatened at the first place by the sea level rise. It brings together policy-makers, experts and other stakeholders in order to support Mediterranean countries and regional stakeholders to address the above challenges.

The main goal of this event, with title “Cultural Heritage and climate risk: Putting Copernicus earth observation data to work in the Mediterranean region” was to raise awareness of the open access to environmental and climate data, as well as technical solutions and training available from ECMWF’s Copernicus Services (Climate Change Service and Atmosphere Monitoring Service), using the paradigms of the cultural heritage-related climate challenge faced by the Mediterranean region, for coastal areas and islands.

An expert panel consisting of Mr. Grammenos Mastrojeni, Senior Deputy Secretary General of Union for the Mediterranean, Mr. George Kremlis, Chairman of the Flexible Mechanism of the Greek Initiative at UN level, Ms. Karina von Schuckmann, Oceanographer for Copernicus Marine Service and Mr. Carlo Buontempo, Director of Copernicus Climate Change Service, analyzed the increasing risks in the Mediterranean basin, and how free and open earth observation data from the EU’s Copernicus programme can assist action in this context. The Head of User Engagement in ECMWF, Mr. Stijn Vermoote, was the moderator of the panel. In this context, the new application developed by C3S and ECMWF was presented. This is an innovative tool which by clicking on the threatened site, information on the past, present climate status and future projections, covering the threats on the given sites is provided. Full functionalities are already available for Delos, Venice, Alexandria, and other sites.

Mr. Mastrojeni started by emphasizing that we need to take action against climate change impacts in the field of cultural heritage in the Mediterranean, one of the fastest warming region in the world! He noted that the Mediterranean region is already experiencing sea level rise and that the cultural balance of this region is at stake. Mr. Mastrojeni mentioned the need all data to be accessible and understandable by everyone.

Mr. Kremlis presented the emblematic Greek Initiative at the UN level regarding the “Climate Change Impacts on Cultural and Natural Heritage” which is supported by more than 100 UN member-states to-date. Mr. Kremlis referred to the coordination activities taking place and highlighted the importance of the innovative application of Copernicus, that provides the scientific tools for implementing a knowledge-based approach enabling data-driven informed decisions for the adaptation/resilience of the threatened sites. The case study of Delos Island was highlighted, as a real-life example with rich cultural assets affected by the impacts of climate change and its effects and specifically by the sea level rise. Mr. Kremlis underlined the importance of protecting all endangered islands and coastal zones, including both tangible and intangible heritage. The significance of distributing information and sharing good practices among an international network of focal points was also noted. Lastly, Mr. Kremlis emphasized the need to mainstream culture in climate diplomacy.

As Ms. von Schuckmann mentioned, global scale heating of the climate has caused sea level rise and ocean warming. Human influence was the main driver of global sea level rise already from late ‘70s, a situation that continues to exacerbating. In regional scale, the factors that influence sea level rise in Mediterranean are mainly ocean winds and currents, gravitational effects of moving water as well as sinking and rising of the land due to both natural and human factors. The entire Mediterranean basin is affected by sea level rise at rates up to >6 mm/year. Ms. von Schuckmann emphasized to the fact that the majority of cultural World Heritage Sites in low-lying Mediterranean coastal areas are currently vulnerable to a 100-year flood due to coastal erosion. Until 2100, the region’s flood and erosion risks may each grow by 50% and 13%, respectively, with much larger increases at specific WHS.

Mr. Buontempo explained how free and open earth observation data from the EU’s Copernicus programme can be used for benefit, providing value in support of stakeholders and key players of cultural heritage protection. According to Mr. Buontempo, the main challenge is that the data we have is often not immediately understandable or usable to inform context. Under this concept, an interactive application was developed by the Copernicus Services in collaboration with the UfM, which maps the sea level in different places of the Mediterranean basin exactly in the location chosen by the user. In this way, it is possible to map these projections on sea level rise against historical sites and provide an assessment of the vulnerability of the sites.

Lastly, the intervention of Ms. Nuria Sanz, Director of UNESCO Office in Egypt, added value to the side-event. Ms. Sanz underlined the importance of preserving cultural heritage all over the world by all means, including those sites which are not characterized as World Heritage Sites neither nominated at the Tentative List. Mechanisms should be developed to provide climate data in an accessible format and joining forces in this direction is encouraging. 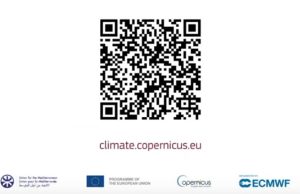